This space is home to learning materials and tutorials created for CyVerse products and services. To search the entire CyVerse wiki, use the box at the upper right.

ACCESS TO OR USAGE OF THE FOLLOWING SERVICES WILL BE UNAVAILABLE OR DISRUPTED:

The following services will NOT be affected by the maintenance: CyVerse Wiki and JIRA

Keep up to date with our maintenance schedules on the CyVerse public calendar
http://www.cyverse.org/maintenance-calendar
Check your local timezone here https://bit.ly/36iVOkX

Winnow is a Python-compatible known truth testing tool for genome wide association studies. Winnow is, quite simply, a tool which evaluates other tools. Winnow requires output from a GWAS tool (most GWAS tools have the same style of output, hence the reason it strictly measures these programs) after analyzing a data set. Given the "known truth" of the original data set, Winnow outputs a series of fit statistics—such as root mean-squared error and the false positive rate—to determine the validity of the GWAS tool and whether or not it was truly useful in analyzing the data. The two main statistics to look at are mean squared error (RMSE), and area under the receiver-operator curve (AUC).

How to Get Started

In your Validate Workflow v0.9 Atmosphere instance, the files for the program are located in the /usr/bin file, along with the documentation and the example files. To start, you can change your directory (though if you wish to just call Winnow from its location, this is not necessary). This can be done by opening the Terminal emulator, and typing:

Note that the documentation and the example data for Winnow are both contained in the /usr/bin directory under the Validate_Info and Example_Data folders, respectively. The actual program is contained in winnow.py, so run the following command to see all the possible inputs for Validate:

For the format of the known-truth file, OTE stands for “Only Truth and Effect.” As the name implies, such a file only contains the SNPs with effects and the values of those effects. FGS stands for “Full Genome Set,” and this file type lists every SNP with their effects. Both file formats can be arranged with either two rows or two columns. Also, if your aggregated results have the CSV file extension, you must change both the kttypeseper and seper options to "comma" (as opposed to the standard "whitespace" delimination).

There will be two output files created on the Desktop: the actual results file, ExampleResults.txt, and another parameter file, will be created on the Desktop. Please note that if the beta argument was not included in your Winnow run, that the MAE by AUC plot in the Demonstrate2 code for the next step will be unavailable, so you must set that option to FALSE. All other plots are still available, however. 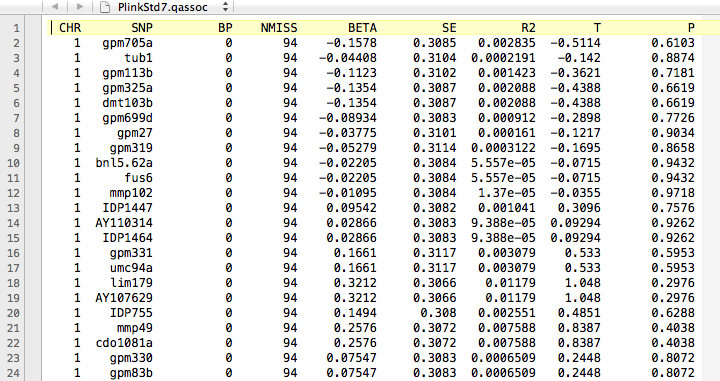 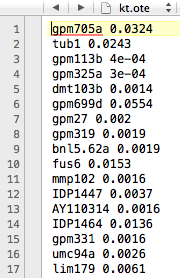 Note: It is usually helpful to convert the data into Comma Separated Value (CSV) format, and can be done with the following command line,

The output file for Winnow, specified with whatever name you chose, contains between 15-18 columns, and the number of rows depends on how many results files were placed in the aggregated folder. Each column indicates a particular fit statistic with each row indicating one result file. The fit statistics currently used in Validate, in order of appearance are…

Though the output is typically a text file, one can easily reformat it into .CSV style or other formats. An example of formatted Winnow results from the aforementioned PLINK analysis is shown below.

In this case we can conclude that PLINK was perhaps not an appropriate tool for this dataset. The inability to identify any true positives after adjustment means that none of the SNPs from the known truth file were detected. Beyond that, the AUC levels below 0.5 indicate that using PLINK actually was less accurate than random guessing. Though we can choose to visualize this in Demonstrate, one likely would be safe in concluding that running this data with another GWAS analysis tool may be better than using PLINK.

Along with the actual results, each run through of Winnow will also produce a parameters file for future reference or use with Demonstrate. While extra lines will be included depending on whether covariates or p-value adjustments were included, several parameters will always be included: the output name, the analysis type (with beta or without beta), and the significance threshold. Using the data and options from the example above, the Winnow parameter file would look like this:

Because of the program structure for Winnow, one may easily update or modify the source code with additional performance metrics, delimiter options, and the like. If you are interested in modifying the Winnow program or wish to add more fit statistics to the output, please consult this tutorial.

Information on the AUC: https://www.kaggle.com/wiki/AreaUnderCurve

This tool is still in development and we are testing it currently. If you notice any issues or have any comments we would greatly appreciate them!
Please contact us at labstapleton@gmail.com. Thank you for using our tools!